Join us as we celebrate more than four decades of excellence in nursing education, research and practice, the inspiring 40 Noble Knight Nurse Awardees, and the trailblazing Class of 1981.

As Knights, we “Charge On!” Due to the ongoing COVID-19 pandemic, our much-anticipated 40th Anniversary Gala will be different than what was originally planned.

Instead of gathering in person, we will gather online to honor our past, celebrate the 40 Noble Knight Nurse Awardees, and toast to a bright future ahead.

It will be a memorable night reuniting with the countless students, alumni, faculty and leaders who have all chosen to be a part of our story, including the inaugural BSN cohort celebrating their 40th Class Reunion!

We hope you’ll join us. 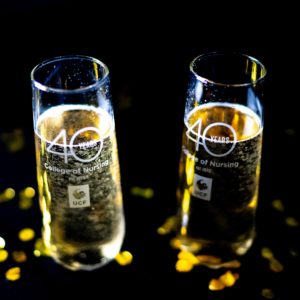 Since this is now a free event, please consider giving an anniversary gift in lieu of tickets.

With your gift of $100 or more, you will receive a set of commemorative 40th Anniversary UCF College of Nursing stemless champagne flute glasses to join the toast during the Virtual Gala.

Meredith McDonough is an award-winning anchor and journalist who has called Central Florida home since joining WESH 2 in 2011. The mother of three, with a fourth on the way, currently is co-anchor on the early evening and late news where she earned an Associated Press award and Emmy award for live breaking news coverage. Before WESH 2, Meredith served as anchor/reporter at its sister station, WPBF-TV in West Palm Beach. Originally from Pittsburgh, Pennsylvania, she graduated cum laude from Allegheny College in Meadville, Pa., where she was honored with the prestigious Wakefield Prize for excellence in mass communications. A post-graduate internship at Fox News Channel in New York confirmed her passion for telling news stories and she has continued the pursuit of her childhood dream ever since. When not at WESH 2 News, she enjoys golfing and attending Orlando Magic games with her husband.

IN CELEBRATION of the 40th anniversary, the UCF College of Nursing is honoring 40 alumni for their significant contributions to the profession.

The 40 Noble Knight Nurse award recipients stood out for their extraordinary achievements. They serve as an inspiration for us all to continue reaching for the stars and be the golden example in the profession.

IN FALL 1979, a small group of BSN undergraduate students and faculty members made history to begin the nursing program at UCF. These trailblazers, and those that followed in their footsteps, have all made valuable contributions to what is today one of the nation’s best nursing programs.

Our history of excellence and bright future ahead are the result of the thousands of students and alumni, and countless faculty and leaders who have chosen to be a part of our story.

Thank You to Our Sponsors

We also appreciate our in-kind sponsors: Blezoo and In Bloom Florist.