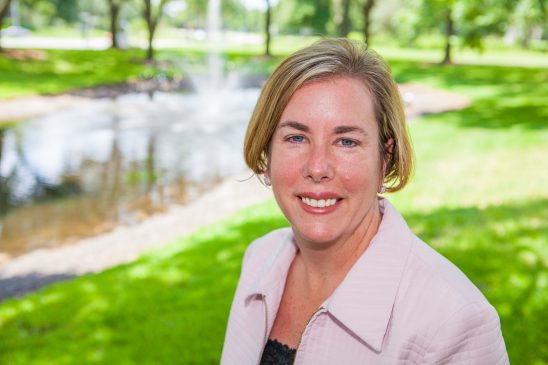 Mindi Anderson, an associate professor in the College of Nursing, has been honored with the Excellence in Academia Award from the International Nursing Association for Clinical Simulation & Learning (INACSL).

The annual award recognizes educators who have demonstrated flexibility, creativity and innovation in simulation-based education that has achieved positive outcomes for students and faculty. Anderson received the award at the 2018 INACSL Conference in Toronto, Ontario, Canada. The INACSL is a global community of more than 2,000 industry leaders, educators and researchers dedicated to transforming practice to improve patient safety through excellence in health care simulation.

“Dr. Anderson excels in all the roles of academia: teaching, research and service,” said Susan K. Chase, professor at the college. “Her thoughtful and creative simulations for a nurse practitioner course have enhanced learning, with students exceeding the national average on the board certification exam and earning a 100 percent pass rate. She has also been instrumental in the development of our innovative graduate simulation program.”

“Her enthusiastic personality transcends global boundaries,” added Desiree A. Díaz, assistant professor at the college. “In addition to leading successful simulation programs at the University of Texas at Arlington and now UCF, she recently completed a Fulbright Specialist program in Thailand where she assisted a nursing school in establishing simulation standards of best practice.”

Anderson is one of the foremost experts in health care simulation education, among just 35 in the world who have earned advanced certification in the field – three are on faculty at the college. An educator for 18 years, Anderson was an early pioneer in the adoption of simulation in health care academic settings. Her research has been widely published and presented both nationally and internationally.

On faculty at UCF since 2015, Anderson is currently director of the Nursing and Health Care Simulation Program, the first and only program of its kind in the state of Florida to prepare leaders in the rapidly growing field. She is also part of an interdisciplinary team developing novel learning and training scenarios associated with an innovative and patented physical-virtual patient simulator developed at UCF.

Has the UCF College of Nursing Positively Impacted You?

The mission of the College of Nursing at the University of Central Florida is to prepare nurse leaders and patient advocates through excellence in education, research and service.

Find out how to give back to your college, today!